It has been a while since I made oatmeal. I'm not a huge fan, but I do like steel cut oats. Trader Joes has a quick cook version (ready in 8 minutes) but today I am making the traditional ones that take about 40 minutes. So here it is... 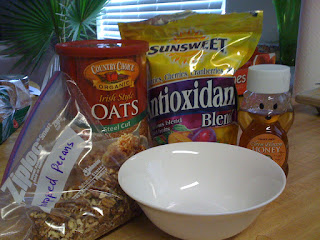 Well almost... like I said, they take 40 minutes.
I'm excited. I have another recipe I want to make, but when I looked in the cupboard, I discovered what I thought was wheat berries was in reality, barley. Not exactly the same thing. So I figured the dried fruit and pecans could go into oatmeal instead. It is cold in my home this morning since we left the windows open overnight. It worked in cooling the place off and a hot breakfast sounds great.

I wanted dried cranberries, but I was at Costco and found this "Antioxidant Blend" of dried fruit instead. It has cranberries, blueberries, cherries and plums (previously known as prunes). I hope I like it!

Ooh, they're about done... be right back. 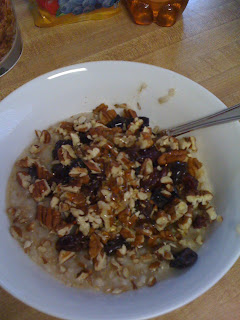 Mmm. Look at all those toppings. They look really nice all mixed in, but I'm using my phone for photos and it doesn't take good close ups.

One last thing- why would make breakfast that takes so long? Well besides that it is good for me, I make enough for a few days. The batch I made today makes 4 servings. It reheats well with just a little added water. I also like to mix in Trader Joes spiced apples (and a little sweetener since they have none) and that is enough extra moisture that it doesn't need water. I just make up little containers that I just have to pop into the microwave.
Posted by Jenn at 8:41 AM No comments: 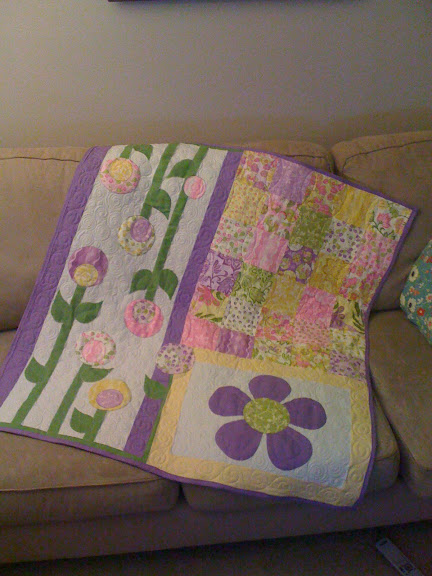 My first baby quilt, pieced by me, but designed and quilted by Natalia at www.piecenquilt.com